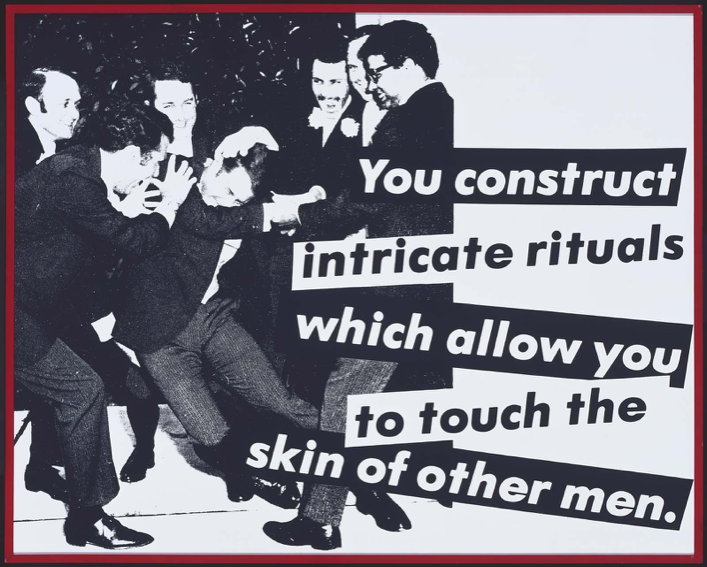 Today’s post is by Minnesota larp designer Jon Cole, of Larp House and Glass-Free Games. Here, Jon describes  a larp workshop, a tool that organizers can use to prepare players for a larp. Read more about larp workshops on Leaving Mundania here and here. This particular workshop teachers players to use “largo,” a de-escalation safeword, to feel more comfortable with physical touch.

Using Touch in Larp: Why and how

In larp, the playing piece is your body. One of the fastest ways to get players more deeply into their character or involved in a situation is to involve their bodies through touch. Human touch floods people’s lizard brains with chemical messages; even if they intellectually know that it’s all pretend, part of them will respond as if it isn’t. That is what makes touch such a powerful gateway to emotional involvement.

Touch only enhances larp if people feel safe. If I think that my body is at risk—if I’m scared or anxious—I am not going to have an enjoyable sense of involvement from touch. A larp workshop about touch prepares players to make contact with each other in ways that are consensual and comfortable. A really good workshop can help people feel safe enough to stretch their own boundaries surrounding touch, which is what the Read Aloud Touch Boundaries workshop aims to do.

Number of participants:  3+ players; 8-25 is optimal
Time: 25 to 30 minutes
Materials needed: Copy of the downloadable workshop script, for the organizer to read aloud.

The aims of the Read Aloud Touch Boundaries Workshop are to:

For groups larger than 25, I’d recommend a techniques such as the ones used at Convention of Thorns that stress explicit negotiation before transgressive play. It also makes sense to break players into multiple sections led by multiple facilitators, as the circle exercises from this workshop will otherwise take too long. If you are using this workshop to establish touch boundaries with a large group, note that it’s important to do this step when all the players are together and before they split into subgroups.

Go slow is at the heart of this workshop. Go slow is a technique where players escalate to some topics or areas to touch especially slowly. This gives everyone time to use the de-escalation safeword, largo, on subject matter that is not a good fit for that player.

Go Slow Does Not Apply to:

In each of these examples the person initiating a touch makes it obvious what they want from the player and leaves them plenty of time to react or simply asks for their permission.

Largo is a de-escalation safeword for use in larp.* A player who says the word “largo” signals to other players that they are not entirely comfortable where an interaction is heading. Depending on context, it may mean that the players need to negotiate a little bit, or perhaps what is needed is completely obvious from context. In a scene where largo is used, players know to continue play a little more gently, allow someone to leave the scene, or negotiate out of character.

Another safeword is “cut” which is used to immediately stop a scene in case of an emergency.

Teach cut and largo as both hand sign and verbal cue. The sign for cut is raising a hand over your head, as if to be called on in school. The hand sign for largo is put your hands up in front of you with your palms facing out, as if to say “slow down.” Either saying the safeword or using the hand signal is necessary and sufficient to use the technique, but encourage communicating through as many mediums as possible. This gives players more flexibility to communicate in various circumstances, such as from a distance or while their hands are occupied.

* In some communities, larpers use the words “brake” or “brems” instead.

When you help players to establish a minimum baseline of touch, it’s important to let them weigh in anonymously. Basically, you’ll have them close their eyes and raise their hands to opt-out of various forms of touch. It’s important that everyone but the facilitator has their eyes closed to avoid social pressure. If all the players but one are cool with a high level of touch, the person left out might feel pressured to accept a higher level of touch. Closing eyes removes this element from the equation.

In Lizzie Stark’s article “Trampled by the Herd,” clinical neuropsychologist Dr. Maria Schultheis suggested that players can benefit from imagining using cut or largo. When players imagine enforcing their boundaries they’ll have a better idea of what their boundaries are and be more ready to self-advocate around them.

When players learn new techniques such as go slow, you can help them get ready to use it through practice. For example, you might have players practice different ways to signal a desire to touch someone or to introduce taboo content. Players relax about using largo if you emphasize that the person using it doesn’t have to say why. Or that having largo called on you is not a rejection of you as a person, instead it is an act that helps the larp overall.

The Read Aloud Touch Boundaries workshop is easy to use, just read it aloud. But there is one thing that can’t be simply written into the document, and that’s an implicit promise made between a facilitator and players at a workshop. The promise is the crux of any safety workshop. Sometimes it is made explicit, often it is not.

This is a safer place to touch and be touched. There are rules here that I will help you enforce, so you can use touch in ways you might not normally. Know that you always have a way out, know that vulnerability is okay here.

People notice and respond to the workshop promise. In games where I’ve used the Read Aloud Touch Boundaries workshop people have mentioned that they were much more conscious of touch, they thought that more safe touch happened in the game as a result. Strangers comfortably touching one another is not an everyday behavior, and it’s one that you can help foster using the Read Aloud Touch Boundaries Workshop.

Your Mileage May Vary

I encourage you to use and remix bits and pieces of the Read Aloud Touch Boundaries workshop in your communities of play. The whole workshop script is creative commons licensed which means you don’t need to ask permission to use or modify it, you only have to mention it as a source.

Remember: Good calibration and safety design is specific to your larp and larp community. The Read Aloud Touch Boundaries workshop is not one size fits all.

This workshop is just one option for safety and calibration; there are many other valid traditions. More importantly, there are more valid methods yet to be shared and discovered. If you come up with an exercise, technique, or workshop I encourage you to document and share about it online so that we all benefit from your wisdom.

Jon Cole is a larp organizer and designer in Minnesota, USA. He is an organizer for Just A Little Lovin’, an acclaimed Nordic larp coming to the United States for the first time in August 2017. Jon writes and publishes live games through his Patreon, Glass-Free* Games. Jon believes that safety and calibration techniques can lead to better larp. He wants to improve the accessibility of that knowledge so that more communities can benefit from it.