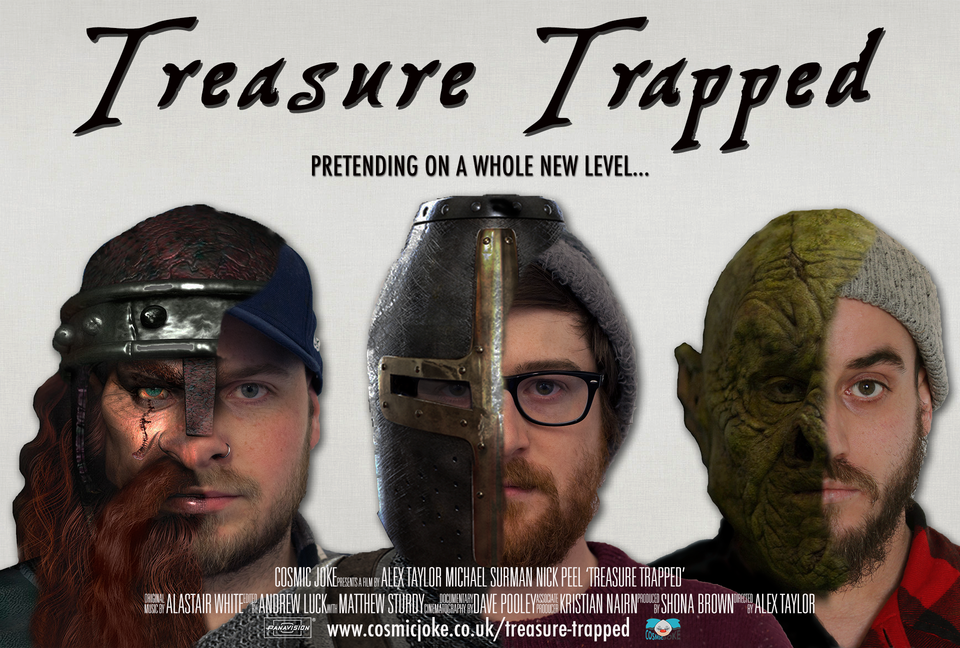 Watching Treasure Trapped, a new documentary about larp by the UK company Cosmic Joke, brought back feelings of nostalgia from my days of reporting for Leaving Mundania. There were the reporters at their first larp, filming a battle, alternately jumping in fear and laughing at themselves. They learn to swing boffer swords, and it’s harder than expected, and they have their minds blown by the Nordic scene.

Treasure Trapped does a lot well. Like any good documentary, it treats its subjects with respect, avoiding the trap so many other larp films (Monster Camp, Darkon) fall into of buying into the basement-dwelling Cheetos-eating stereotype. This film gets it right–the denizens of the UK’s boffer larp scene are mostly there for the community, with costuming and adventure as fringe benefits. It also does a good job of reaching beyond the reporters’ local scenes to Nordica, where they go inside the Monitor Celestra, a high-production BSG larp inside a real destroyer; Panopticorp, a satirical larp about the ad agency from hell; and scenes from inside the Østerkov Efterskole, the Danish middle school that teaches through roleplay.

I may not be the ideal viewer for Treasure Trapped, since I know my way around the larp scene here and abroad, and what interests me about the medium probably differs from the average, perhaps new-to-larp viewer. (Full disclosure: my photo is flashed for about two seconds as part of a Nordic montage, and I know and am friends with some of the folks interviewed in the latter half of the film). For me, I wanted something different out of the Nordic sections in particular. It was hella cool to see students and teachers from Østerkov Efterskole interviewed, for example, but I didn’t feel the film brought me closer to understanding exactly how larp is used to teach. I enjoyed the Panopticorp footage particularly, but it didn’t offer me a deeper understanding of how the larp was designed than the frustratingly incomplete documentation I’ve read. I enjoyed learning a bit more about how boffer larpers do their thing in the UK, but it didn’t seem appreciably different from the larp I attended here in the states as part of my reporting.

Then again, this is a documentary, not a how-to, and an overview of the larp that makes the necessary sacrifice of depth for breadth–we see many communities briefly rather than going in deep with one or two–and I think that is wise in covering the still-relatively arcane hobby.

I think this film would be excellent to show to folks new to larp, or to larpers who want to see their hobby portrayed in media as it really is, or who want to learn more about the medium’s potential and use in other countries, while also remembering what the hobby looks like to outsiders confronting it for the first time. A solid offering that does larp proud.

And I do hope to see the filmmakers next spring at Solmukohta in Finland.

You can find more info on where Treasure Trapped is showing, including information on how to host your own community screening for your larp group here.