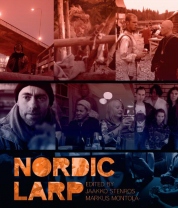 Have you ever wanted to larp in a real submarine? What about an abandoned nuclear reactor? Or maybe you’re interested in fighting a giant dragon that actually breathes real fire? ZOMG!

You can find out what it feels like and how the organizers overcame challenges in Nordic Larp (2010), a beautiful coffee table book edited by Finnish academics Markus Montola and Jaakko Stenros. (Full disclosure: I occasionally correspond with Stenros and Montola, who read a draft of Leaving Mundania.)

Americans reading this collection of thirty essays about Nordic games run over the last sixteen years will surely marvel at some of the spectacular logistical coups Nordic organizers have pulled off, from building a dystopian future slum that sleeps more than three hundred in the center of Copenhagen (System Danmarc), to huge medieval larps garnering a thousand participants (Trynne Byar). Americans may also marvel at the trust which organizers place in their players, who seem to enjoy skirting the line between the real and the fantastical in a way that would simply be impossible in the litigious US. The essays reveal hungry boffer players who kill a real live sheep for food and a number of other shocking acts I won’t demean by taking out of context here — but done for hardcore, let’s-make-this-as-real-as-possible, artistic reasons.

Nordic Larp focuses on games from the experimental Knutepunkt scene, which “takes larping very seriously” as the editors write in the contextual essay that begins the collection, noting, “larps themselves are not necessarily serious, but as a subject they are treated with respect [on this scene].” The games covered span a a wide variety of styles, from more traditional medieval boffer games and vampire campaigns to very serious one-shots that take place in a bomb shelter after the world gets nuked (Ground Zero) or set in an insane asylum, where the characters are the inmates (Delirium).

Each essay examines one game, and is written by one or two organizers and/or players who talk about the format of the game, its theme, and the experience of playing/organizing it. I particularly enjoyed this latter tack, since there’s a lot of writing about larp out there that doesn’t attempt to communicate how totally thrilling a game can feel — it makes for interesting reading. Full color photographs of each game accompany the essays, giving readers a feel for the games’ moods and production values.

And sometimes those moods are deadly serious, which may surprise American readers. Many of the games described in Nordic Larp seem aimed at something beyond entertainment, toward catharsis or politics or simply exploring the limits of human experience. Proportionally, there is not a lot of Frodo in this book. There are persecuted refugees (Europa), Norwegians living under Nazi occupation (1942 – Noen å stole på), and people dying of cancer (Luminescence). Some of the games put big ideas to the test. There are worlds where polyamory is the norm (Mellan himmel och Hav), and Kafka-esque prisoner’s dilemmas (inside:outside). And if a couple of those don’t sound like any fun, well, fun is not quite the point. Of course, it’s not all prisons and weeping for the death of humanity; the book includes plenty of lighter games from steampunk space adventures set in a real  submarines (Carolus Rex), to Wild West towns in need of tamin’ (Once Upon a Time).

American larp designers will find fertile ground for future exploration in Nordic Larp. Forget your character cards and skill lists; here be minimal rules and mechanics, many virtually unknown in the US, from ars amandi (symbolic arm sex for romantic plotlines), to ars odo (staring and shouting contests as conflict resolution) to fateplay (giving characters fortunes that really come true).

I found this book an invaluable aid as I wrote my chapters on the Nordic scene, though I do wish it had an index for ease of reference.

Nordic Larp testifies to the sheer diversity of the Nordic larp scene, and the dazzling seriousness with which Nordic larpwrights and players ply their arts. Anyone interested in the future of larp and its possibilities as a medium should read this book.

Nordic Larp is available for purchase online at Fëa Livia for €30.00 (about $40), plus shipping.