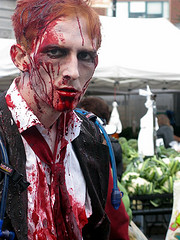 If zombies roamed the earth, humanity’s only hope would be to “hit them hard and hit them often,” according to a team of Canadian mathematicians. “It’s imperative that zombies are dealt with quickly or else…we are all in a great deal of trouble.”

The BBC reports that the paper on zombies is published in the book Infectious Diseases Modelling Research Progress, and the mathematical modeling of a zombie attack has “practical” ramifications such as helping scientists model the spread of new diseases.

The oddly-named Professor Robert Smith?, who added the question mark at the end of his name to distinguish him from the lead singer of The Cure, worked on the study, and explained that the zombies in the study were modeled “using biological assumptions based on popular zombie movies.

According to Wired, the model for a zombie outbreak involves three elements: S = susceptibles, Z = zombies and R = removed. According to the equation, which I could not replicate here, but is available on the Wired site, a zombie infection could rip through a city of 500,000 people in about three days.