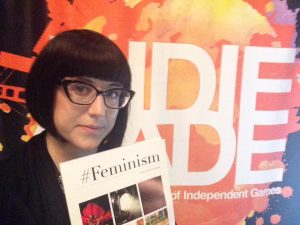 Actual play photo from Kira Magrann’s “Selfie,” one of the games demoed from the #Feminism collection.

I spent this past weekend in Los Angeles at IndieCade 2016, a festival for independent games. IndieCade is many things—a hub for independent digital developers, a Sundance-style festival of indie games where nominees can win awards, and a place where game designers from many different mediums meet. At IndieCade you’ll find board and card games, immersive theater, and more.

I attended to represent #Feminism, which was a nominee this year. #Feminism is the collection of 34 nanogames I edited together with Misha Bushyager, Anna Westerling, and Shuo Meng. I also helped curate the “Big Games” track. I met lots of cool people and played some super-interesting games, but in this post I want to talk about the most larp-relevant parts of my experience, because I want to see more larpwrights go to IndieCade, and I want to help them know what to expect.

I had a delightful time at IndieCade and found the organizers friendly, welcoming, and interested in building bridges with the indie tabletop and larp communities. Three Golden Cobra larps were selects at Big Games, and Shoshana Kessock’s Keeping the Candles Lit was also a nominee. I think cross-pollination between the larp and larger indie gaming communities is a very good thing and might lead to some interesting collaborations.

Staffing the #Feminism booth in the nominee hall dominated my experience, but luckily for me those halls were filled with intriguing game displays. I didn’t get to play too many of them, since I was tethered to my own booth, but I got to observe them–and how the crowd interacted with them–from afar.

To my left was an award-winning surreal game controlled by a velvet vagina, far in front of me was the also-award-winning territorial control game played on a sewing machine. To my right was a game that periodically featured a woman making loud orgasm noises. I watched a VR spa where kittens allegedly walked all over you. I visited the interactive theatrical experience of the Hamlet Mobile, an actual, beautifully-decorated van parked out back where you shadowed an actor who tried to pry personal secrets out of you. It was a delightful 15-minute experience.

Sitting at the booth had its own virtues, providing a chance to get to know people a little in a natural setting and find out about their interest in games. I met developers, composers, voice over actors, coders, museum curators, scholars, students, and members of the media.

In a predominantly digital festival, the dead-tree format of our analog game collection. was a fun anomaly. We had a pretty steady stream of enthusiastic people stop by. It took me a little while to figure out what demoed well for this crowd, and eventually settled on Kira Magrann’s game from the collection called “Selfie,” which involves taking lots of selfies and talking about them. The folks who stopped by had enthusiasm for our project that was infectious.

Well, at least new to me. I learned a couple I think are useful.

At Nick Fortugno’s talk “Real Games for Real People” I expected to hear a bunch of information about how to design larps, since they are real games for real people in the real world (as opposed to the digital one). But the talk focused instead on something I’d never heard of, namely “street games.” These are physical games that aren’t roleplaying games in the sense that larpers usually think of. Picture variations on tag, forming conga lines to cross the street, or other pervasive games that have you out in the real world exporing and doing tasks.

Because street games are designed to be played outside in public, they often rely on getting strangers to participate. Fortugno recommended using small, escalating asks to do this. Doing a rules dump up front, or asking for an hour of time, even if the game will take an hour, might feel like too much. Of course, using escalating small asks also left me with some questions about game safety—it’s socially harder to leave a game midway through. In larp, this is the quandary that has launched a thousand safety techniques. Since street games seem more casual, with lower levels of intensity, it may not be as much of an issue.

The other thing Fortugno recommended investigating was body hacking. Apparently there’s a ton of research on how the physiognomy of the body responds to certain poses and motions. Making a motion like you are grabbing a large ball, for example, makes you move your hand slower, because you’re wired to protect your fingers from hits.

Froth is what a live experience, such as a larp produces. It’s a combination of war stories, post-game artifacts and ephemera, internet posts, play reports, and buzz. In fact, this post itself could be considered “froth.”

I learned about this term from Glass-Free Games developers Wendy Gorman, David Hertz, and Heather Silsbee. They were demoing their awesome, Golden-Cobra-winning larp Still Life, about the existential lives of rocks at IndieCade. After one session, an escape-the-room designer began chatting with them and eventually got around to “froth,” mentioning that she tries to design games so that they make good froth. Just hearing about it kind of blew my mind.

Calibrating Your Larp for IndieCade

IndieCade’s juried submission process takes applicants each year, and larps are welcome to submit. Enormous 300-person larps might be more challenging for the judges than something with a concise script, but I think that the festival tries to send reviewers out to experience them if possible. Competition aside, I want to talk about what demos well at IndieCade, because it’s got a particular format that makes strange bedfellows with larp. That frission suggests that larps with particular attributes will work better for this crowd, which in turn suggests some design constraints or hacks for classic games.

Here’s the main thing to understand about IndieCade: the play that happens at the festival is casual gaming in open spaces. People wander around with their friends, pick up a game at a time that suits them and play it, often with others watching, and then move along after five to 15 minutes.

These runtime conditions aren’t usual for larps, which typically require a handful to lots of participants, a room with a door that closes, and at least one hour of playtime. That length of time is way too big an ask for this con. Even if it wasn’t, you still have to find ways to manage the spatial intimacy and player number quandaries. The spectacle aspect adds another wrinkle—the essence of larp is participation, and it’s hard to create intimacy in an open public space when others can watch.

You can use multiple methods to skin this cat. Here are a few ideas…

Options for Dealing with the Space

Options for Dealing with Random Numbers of Players

Anyway! I’d love to see more larps go to IndieCade. Hope this post helps you know what to expect and how to make your own luck while you’re there.

2 thoughts on “Getting Larpy at IndieCade 2016”