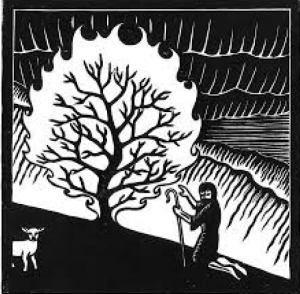 This Miracle is a freeform game about religion written by Nick Fortugno and me. Download the free script for This Miracle here.

Below, we’ve got the quick pitch for the game, followed by some tips and tricks discovered in play test. If you’ve played or run the game, we’d love to hear about your experience in the comments.

How do religions emerge over time, and what do they mean to the faithful? This Miracle explores religion and its place within human society with storytelling, roleplaying, and arts and crafts.

During the first part of This Miracle, players work in small groups to build a set of religious myths, ceremonies, and artifacts* that are swapped from group to group to simulate how religions emerge over time. During the second part, participants enact the new religion as characters undertaking a religious pilgrimage. During the pilgrimage, they will try to work out their personal dilemmas through interacting with the divine.

In this game, you will portray an archetype, and a character that draws from that archetype. You’ll also have the opportunity to make cool stories and cooler ceremonies, unleash your inner child with some craft projects, and consider how religion can be transformative.

This American freeform game incorporates elements from Fastaval-style freeform, US indie storytelling games, and Norwegian Larp Factory-style larps. It is a game about storytelling, spirituality, and how on the journey toward self-discovery, you are never alone.

*Afterwards, these artifacts may be displayed as part of a larger pervasive game

Player type: You are brimming with secret creativity, and don’t mind improvising story and character elements in a supportive environment. You also aren’t afraid to play hard, and even risk embarrassment for a role. You love stories and want to think deeply about religion.

Game master type: You are great at thinking on the fly and pulling story elements together with your co-facilitators to create the best player experience. You’re also good at creating a reverent tone among players, and a caring environment in which players feel they can go hard and still be supported. You are comfortable both explaining the methods of the game, and playing a character that will perform some light facilitation tasks from within the storyline.

IN GENERAL
DURING THE WARMUP
ACT1
ACT2

If you ran or played this game, we’d love to hear about it in the comments!

3 thoughts on “This Miracle: A freeform game about religion”