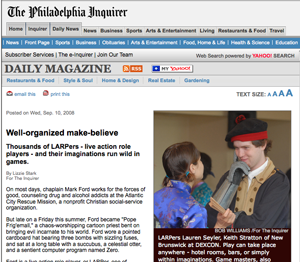 On most days, chaplain Mark Ford works for the Prayer forces of is good, counseling drug and alcohol de addicts cheap jerseys at the Atlantic City Rescue Mission, a nonprofit Christian social-service organization.

Feature on LARP for the Philly Inquirer that includes some audio and few cheap nba jerseys characters who may appear in the book.

One thought on “Well-organized make believe”